NOTE: Basketball shall be played according to the Official OSAA Rulebook of High School Rules, with the exception of the following modifications and clarifications for youth sports that have been adopted by Epuerto Sports. 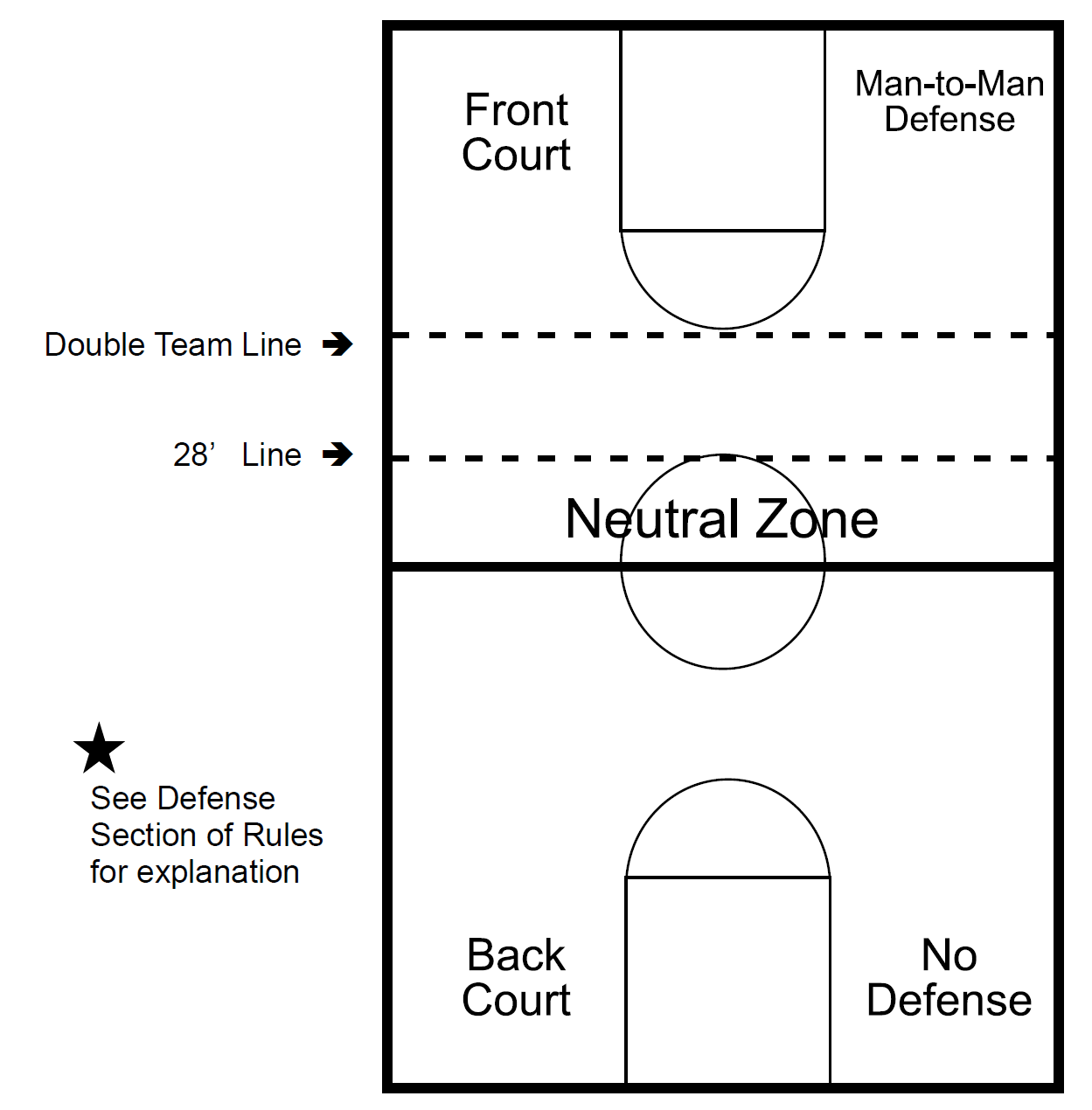 1. Equipment and Facilities.
A. The Ball – Rubber or Rubber Composite – basketballs supplied by Epuerto Sports, shall be used for practices and games. If balls other than those issued by Epuerto Sports are used at practices (balls belonging to individual players, schools, etc.), it shall be the coaches responsibility to insure that all borrowed balls are returned at the end of each practice and those balls issued to him/her by Epuerto Sports do not get lost in the shuffle.
1. Junior Ball (27.5”) – 3rd and 4th Grade
2. Intermediate Ball (28.5”) – 5th Grade and 6th Grade
3. Full size Ball (29.5”) – 6th Grade (Boys)

B. Uniforms-
1. Team shirts– Uniforms shall be provided for each player to wear during the season and must be worn on game day. If both teams show up with the same color game shirts, one team shall wear pennies to separate the teams.
2. Pants/shorts- Players will wear their own shorts or long pants. Although not required, it is recommended that they be of the same color.
3. Shoes – Shoes must be acceptable for court use (street shoes and those that leave marks on the floor cannot be used), and should provide adequate support.
4. Protective equipment– Players may wear protective equipment providing they do not violate basketball rules. Mouth guards are recommended. If eyeglasses are worn, they must have a safety strap to keep them on.
5. Jewelry- All jewelry must be removed prior to playing. ( exception: Medical or religious medals may be worn, provided they are taped to the body under the uniform) Ear-rings must be removed; they can not be taped. Hair devices must be of soft materials, taping hard ones is not allowed. The official shall issue a warning to both benches on a first offense by either team, second and subsequent offenses will result in a technical foul to the offending team.

C. Facilities– Local elementary, middle and high school gyms will be used for practices and games. Court sizes and markings will be determined by those present at the school being used, with the following modifications.
1. Basket height – 5th and 6th grades will use a 10-foot basket, 4th graders will use a 9-foot basket, and 3rd grades will use an 8-foot basket.
2. Free Throw Line – free throw lines for 3rd and 4th grades have been shortened to 12 feet from the basket.
3. Three Point Line – The three point shot will not be used at any grade level.
4. 28’ Line – This line will be used in conjunction with the mid-court line to describe the neutral zone used in 3rd & 4th grades. It will not be used for 5th & 6th grade games.

2. The Game
A. Length of the Game.
The game is divided into eight periods for 3rd/4th grade and four quarters for 5th/6th grade. A running clock will be used for all grades. The clock will be stopped only for breaks be-tween periods/quarters, timeouts, at the referee’s discretion (injury, equipment problems, etc.) or as follows: 3rd & 4th grade – The clock will stop when a shooting foul is called to assist players in setting up to shoot the free throw. The clock will start when the ball is handed to the shooter on the last free throw attempt. All grades – The clock will be stopped during the entire 8th period/4th quarter if, at the beginning of the period/quarter, the point differential is 10 or less. If the point differential is greater than 10 points, there will be a running clock the entire period/quarter. Halftime (between period #4 and period #5/quarter #2 and quarter #3) shall be no longer than five minutes; the break between all other periods/quarters shall be no more than one minute each.
1. 3rd and 4th Grades. – Each period shall be four (4) minutes.
2. 5th and 6th Grades – Each quarter shall be ten (10) minutes.

D. Starting the Game.
1. Timer/Score Keeper -Each team shall furnish one adult volunteer to serve as score keep-er or timer. These volunteers should be in place at least 15 minutes prior to game time. Referees and gym supervisor will show them what to do.
2. Line-up Cards – Each coach must submit their completed line-up card to the score keep-er at least 10 minutes prior to game time. The order in which the players appear on the card shall determine their rotation into the game (see Mandatory Substitution Rule for explanation).
3. Coin Flip – Baskets will be assigned based on which one the team used for warm up. Teams will switch baskets at halftime. Each team shall designate one player to act as captain and represent the team (players must rotate as captain).
4. Pregame Free Throws (3rd and 4th Grades only) – Each player shall shoot two free throws before the game begins. Points scored will be recorded. Players will shoot in the order they appear on the line-up card. If teams are not equal in number, the referee will randomly pick the player(s) who will shoot free throw(s) until both teams have the same number of free throws.
5. Jump Balls – Each game will begin with a center jump ball. During the game, including the start of each quarter, all jump ball situations are taken out of bounds with each team alternating possession. A center jump ball will also be used to start any over-time period (5th and 6th grades only).

F. Defense.
1. Back court Defense: 3rd/4th Grade: Once an offensive player or team has gained control of the ball in the back court (including throw-ins), the defensive team must not hinder the offensive team in any manner in its attempt to bring the ball into front court. Defensive players may not guard their person until he or she has established position with both feet across the 28’ line. Any ball passing from back court cannot be intercepted until it has crossed the 28’ line. 5th/6th Grade: FIRST HALF OF SEASON NO FULL COURT DEFENSE. HALF COURT ONLY ONCE PLAYER HAS POSITION ACROSS THE HALF COURT LINE OR BALL HAS BEEN PASSED ACROSS THE HALF COURT LINE. HALFWAY THROUGH SEASON TEAMS MAY PLAY FULL COURT
2. MAN-TO-MAN DEFENSE DURING THE FINAL QUARTER OF PLAY WITH FOLLOWING PARAMETERS: Teams may apply full court defense (no pressing) only if their lead is 10 points or less. If a team leads by more than 10 points, then the defense may only be applied after crossing half court.
3. Neutral zone (3rd& 4th grades only) – A 28’ non-defensive line will be used with the mid-court line to describe a neutral zone. This zone can be used by the offense to set up plays without being closely guarded when the ball first crosses the mid-court line. Defensive players may not guard their players until they have established position with both feet across the 28’ line. Passes cannot be intercepted until the ball has crossed the 28’ line. Once the ball has penetrated the 28’ line, the neutral zone cannot be used again until the next possession.
4. Zone defense is not allowed at any level. In a zone defense a player guards an area of the court rather than an opponent.
5. A defensive player may not be in the key longer than three seconds if it is apparent that player is not actively guarding an offensive player.
6. Man-to-man defense is the only defense allowed at all grade levels. Players must be actively guarding an opponent. However, basic defense variations such as switching, sliding through, dropping off on the weak side and double-teaming are permissible.
7. Double teaming restrictions. Once the ball has been advanced into front court, only one-on-one defensive positions may be established until a team has established possession below the top of the key (circle) extended. Once this has been established double-teaming defense may be used in the entire front court area. No trapping will be allowed at the top of the key.
Penalty for violation of defense rules: First offense – warning is issued to coach; subsequent offenses – two shot technical foul and ball awarded to opponent.

G. Offense.
1. For all grade levels, only standard man-to-man offenses in which all players play an active role may be used. Offenses that are designed to draw players to the sides (4 corner) or bunch players so that one offensive player can go one-on-one with a defensive player are illegal.
2. The offensive team may not stall.
Penalty for violation of offensive rules: First offense – warning is issued to coach; subsequent offenses – two shot technical foul and ball awarded to opponent.

H. Free Throws.
1. All Levels, the shooter may not leave the free throw position until the ball hits the rim. The players lined up on the lane may leave their positions to rebound when the ball leaves the shooters hands.